Speaking to reporters outside Rideau Cottage in Ottawa on Thursday, Canadian Prime Minister Justin Trudeau said even under the best-case projections released earlier in the day by his government, it's likely the "first wave" of COVID-19 peak infection will likely not end until the summer.

The coronavirus could cost 11,000 to 22,000 Canadian lives over the course of the pandemic — and that’s the best case scenario with the strongest control measures.

If those controls are weak, those deaths could spike to more than 100,000.

That’s according to modelling released by federal public health officials for the first time on Thursday in Ottawa, which lays out three different potential scenarios based on strong, weak and no responses to containing the virus.

It’s important to note that projections are not carved in stone. They are estimates based on the best available data so far, and that data can and does change regularly.

“Models are not a crystal ball.”

But they offer a glimpse into where the data suggests the country could be heading, and the emerging picture is grim: 22,580 to 31,850 cases by April 16 with 500 to 700 potential deaths by the same time.

The modelling lays out three possible scenarios: one with strong control measures such as high rates of social distancing and testing, one with weaker response measures, and one with no measures taken. 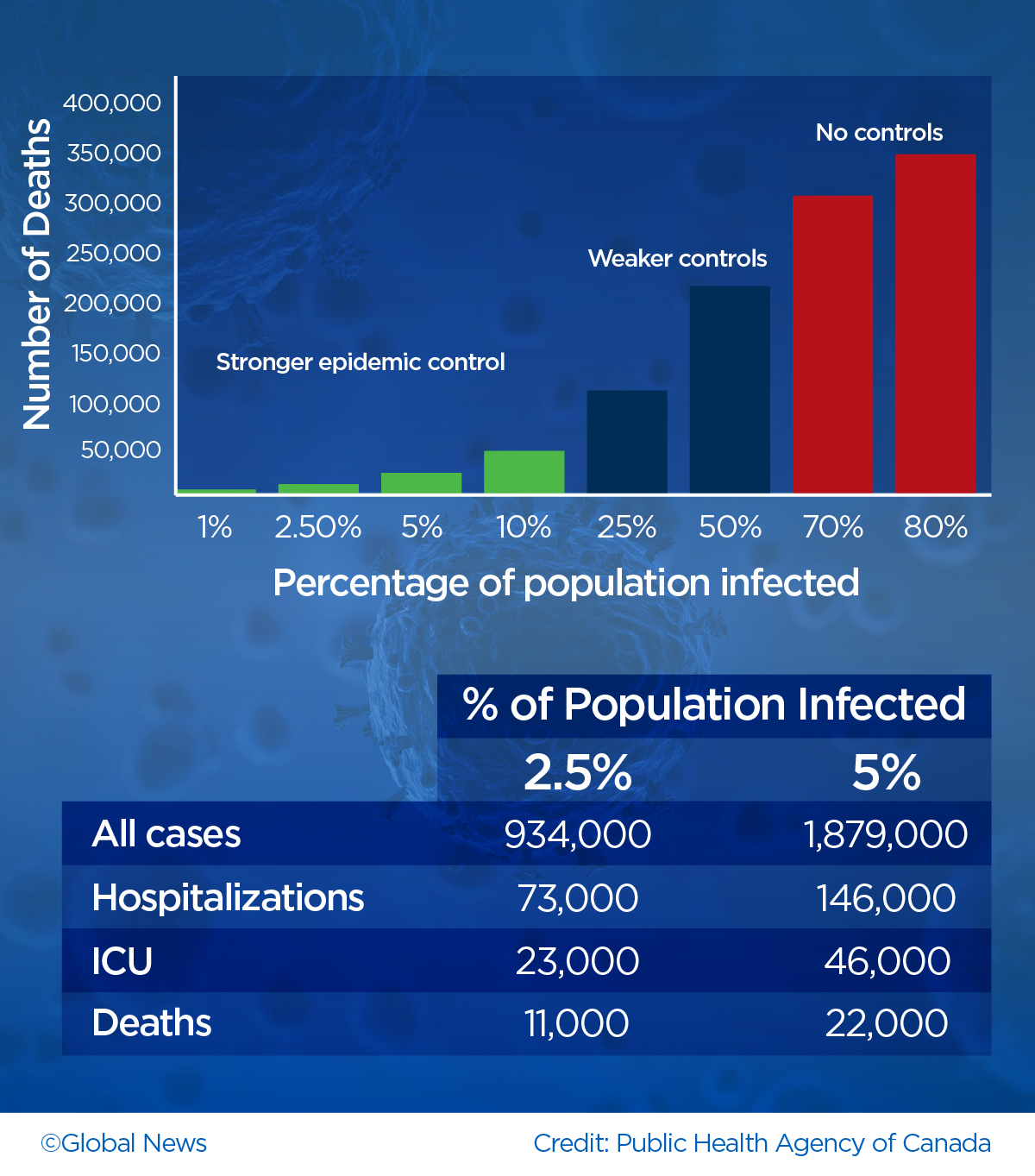 Tam said the objective for Canada is to be in the strong control measure camp, which the modelling suggests would result in roughly 11,000 deaths if 2.5 per cent of the population is infected and 22,000 deaths if that infection rate rises to five per cent.

If the infection rate hits 25 per cent under the weaker control measures scenario, those deaths could spike to more than 100,000 or 250,000 if 50 per cent of the population is infected.

“These stark numbers tell us we must do everything in our power to stay in the control model,” Tam said.

Tam continued, adding that it is not clear yet where Canada is on those models.

“All I can tell you is we stand a really good chance of staying in that green zone if we try and continue everything we’re doing now.”

Even if the country is successful in getting the epidemic under control, measures like physical distancing, restrictions on international and domestic travel, and contact tracing will need to remain, Tam said.

“It is too early to know how close we are to the peak from a national perspective,” she added, saying that officials won’t know when the peak occurs until they start seeing downward numbers.

And even after the peak, control measures will not be able to be lifted, she said.

“We can’t give up after the peak.”

The modelling for the best case scenario with the strongest responses suggests it’s possible the cases in Canada could peak in the coming months and then subside into the fall.

Under the weaker response model, that peak might not come until the fall with infections subsiding over the winter and spring of 2021.

READ MORE: No return to ‘normality’ until coronavirus vaccine is available, Trudeau says

“We expect subsequent smaller waves. That’s why it’s difficult to say nationally that at such-and-such a date, we’ll be able to set aside these measures,” said Dr. Howard Njoo, deputy chief public health officer, when asked whether the restrictive measures in place could last until December 2020, for example.

“It’s up to each province and territory to monitor their epidemics very closely. If it becomes clear that we are on the downward side of the curve, we may be able to relax some measures but it will be up to the provinces and territories.”

He added that officials know the coming Easter weekend and similar upcoming celebrations will be challenging for people given many are used to being with family and friends.

But he and Tam noted that it is crucial to maintain physical distancing and not loosen up any of the measures in place so far if the country wants to continue to try to control the spread.

“It is a matter of life and death,” said Tam.

“When I say we’re authors of our fate, this is something that’s really serious.”

Prime Minister Justin Trudeau noted in his daily briefing shortly after the release of those numbers that it will likely be months before the measures in place can begin to be rolled back.

“Normality as it was before will not come back until we get a vaccine for this and as you say, that will be a very long way off,” he said. “For a year, 18 months there will be things we just aren’t able to do.”

Officials have been under pressure to release national coronavirus scenarios for weeks.

Canada’s two most populous provinces have already done so, along with Alberta and B.C.

Ontario projections released last week predicted the province could see 1,600 deaths by the end of April even with the current social distancing and shutdown measures in place.

But that’s compared to the projected 6,000 deaths by the end of the month if nothing was done at all.

Ontario’s modelling also predicted the pandemic could last for two years, with total death tolls in the province of between 3,000 and 15,000.

That province predicted it will see its peak in cases around April 18, while Alberta estimates are that its residents won’t see the peak in infections until May.

The federal modelling comes at the same time as the federal government released sobering new job numbers showing Canada lost one million jobs in March, leading to the biggest one-month jump in unemployment since 1976.