WATCH LIVE: George Floyd protests in Atlanta, Georgia (Warning - this is live coverage. There may be content disturbing to some viewers. Discretion is advised).

A police car has been set on fire in Atlanta, where protesters were using barricades to break the windows of cruisers while others were jumping on the vehicles and shattering windshields as they demonstrated against the death of George Floyd.

READ MORE:
Officer charged with murder in George Floyd’s death had knee on his neck for nearly 9 minutes

Activists spray-painted a large CNN logo outside the building, breaking a window and tagging doors. One protester climbed on top of the CNN sign and waved a “Black Lives Matter” flag to cheers from the crowd.

Police cars getting literally destroyed in Atlanta outside the CNN Center pic.twitter.com/x5zRxZVQpb

Protesters pelted officers who came over with bottles, striking some of them. Other bottles thrown at authorities exploded behind the police line, but no officers appeared to get hit.

READ MORE:
George Floyd: Scenes from protests in Minneapolis and around the U.S.

The officers backed their line away from the group of protesters who were throwing objects at them.

Police ordered demonstrators to leave the street and threatened to arrest them if they did not leave quickly.

Protesters used accelerant to burn an American flag. People were watching the scene from rooftops, some laughing at skirmishes that broke out and vandalism by the protesters. 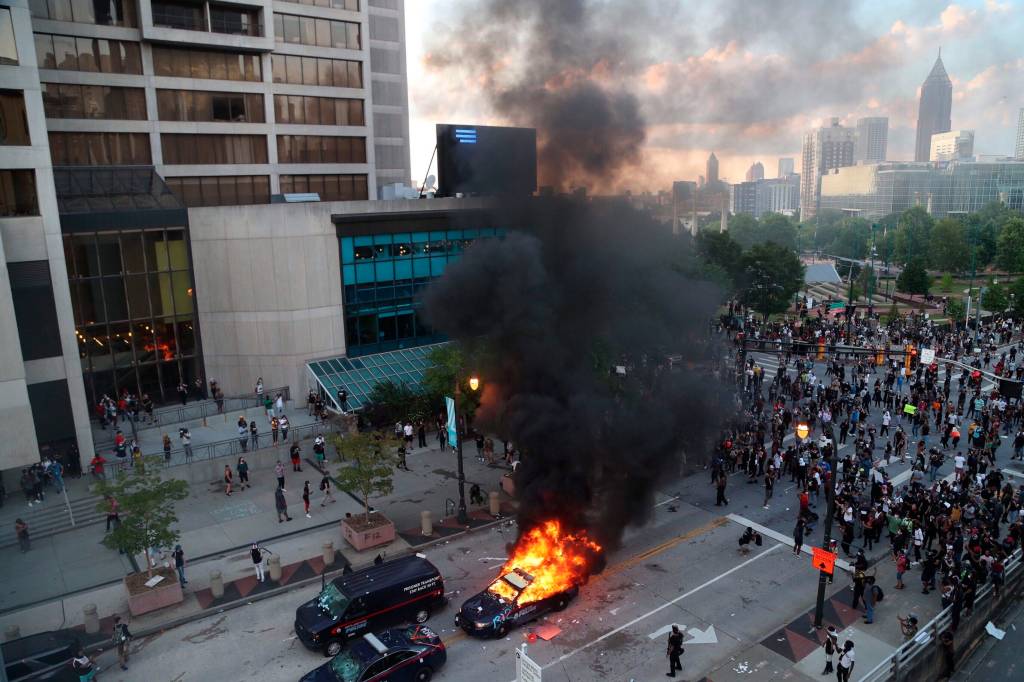 A police car burns after protesters marched to the Georgia State Capitol and returned to the area around the Centennial Olympic Park and CNN center where some confronted police Friday, May 29, 2020, in Atlanta.

Protesters were also walking on the interstate in downtown Atlanta and appeared to be trying to block traffic.

The Georgia State Patrol has responded.

Earlier, as the protest appeared more calm, Kaity Brackett, 27, said she came out to the protest because she thinks the entire criminal justice system needs to be overhauled, starting with policing.

She said the Ahmaud Arbery killing was a catalyst for her and referred to his death as a lynching. Arbery was killed on Feb. 23 by a former district attorney investigator and his son, who were not arrested until after video emerged months later.

Brackett wore a blue mask and sat with her partner and a friend. She was less concerned about the threat from the coronavirus.

“We risk our lives going to the grocery store, going to get gas,” she said. “This is more important than all of that.”