Canada is heading towards a potential sixth COVID-19 wave, experts say, as cases and hospitalizations have started to creep back up again across the country.

While average daily case counts have levelled off nationally, there continues to be regional variability across the country with several jurisdictions reporting increases, said Dr. Theresa Tam, Canada’s chief public health officer in her latest weekly update on Friday.

A Global News analysis of the latest provincial wastewater data also shows a resurgence of COVID-19 in Ontario, Alberta, Saskatchewan and parts of British Columbia.

The more contagious BA.2 subvariant of Omicron, which is now the dominant version of the virus in several provinces, coupled with loosened public health measures is driving the increase, experts say.

“It looks like we are heading towards another spring wave,” said Dr. Gerald Evans, an infectious disease specialist at Queen’s University in Kingston, Ont.

The rise is more prominent on the eastern coast than Western Canada, according to Dr. Horacio Bach, an infectious diseases expert at the University of British Columbia, who like Evans says that restrictions were lifted too quickly.

The upward trend is being reported in several Canadian provinces.

In Quebec, since the start of March there has been a 4-per cent increase in total infections and hospitalizations have spiked in recent days.

On Tuesday, the province reported 1,153 hospitalizations, representing a 38-patient increase compared to the previous day, and 63 people were listed in intensive care unit — an increase of 10 cases.

In Ontario, following a dip in February, COVID-19 cases started spiking in early March, coinciding with the province’s phased reopening, according to wastewater data surveillance by the Ontario COVID-19 Science Advisory Table. 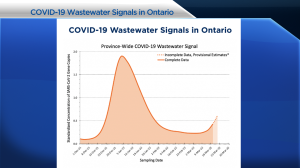 Ontario reported 790 people were in hospital with COVID-19 — a 20-per cent increase from Monday — and 165 were in intensive care Tuesday.

Dr. Isaac Bogoch, an infectious diseases expert at the Toronto General Hospital, said it is “pretty clear that there’s a growing burden of COVID in many communities across the province.”

“We’re in the very early part of a wave in not just Ontario, but also probably many other parts of the country,” he said.

As of Monday, 288 people were in hospital, including 48 patients who were in intensive care. The number dipped down again on Tuesday to 273 patients, yet the province has seen multiple irregular daily increases over the past week after six straight weeks of declines.

Bach of UBC said his biggest concern is the risk to vulnerable populations, including older Canadians and those with weakened immune systems.

It’s a similar story in Alberta, where an upward trend of cases started in early March, according to wastewater samples.

Alberta’s chief medical officer of health says the Omicron subvariant BA.2 is now the dominant COVID-19 strain in the province, with approximately 60 per cent of positive cases of BA.2, as of March 21.

Based on the current modelling, experts anticipate that the spring wave will not only cause cases to rise, but there is also the risk of an increase in hospitalizations, ICU admissions and deaths.

“I don’t think anyone would be surprised if in a few days, or sometime next week we start to see a rise in hospitalizations as well, that corresponds with the rise in cases,” said Bogoch.

Evans echoed that thought, but added that the numbers “won’t be quite as high as we’ve seen in previous waves” because Omicron and its BA.2 sublineage produces a milder disease in the vaccinated population.

However, with the health-care system already strained due to hospital staff off the job with the virus, there is concern about the surge in infections if Canada hits another peak.

“We don’t have full staffing at the moment, and that’s going to continue to be a challenge,” he told Global News.

The good news is that more than 80 per cent of the Canadian population is fully vaccinated, while 47 per cent have received three doses.

And that could potentially result in a lot more severe cases in older people who have three doses of the vaccine.

‘Rise of the BA.2 variant is worrisome’: Quebec urges caution as it warns of ‘possible’ 6th COVID wave

This is why Quebec approved a fourth COVID-19 vaccine dose for at-risk groups last week.

Canada’s National Advisory Committee on Immunization (NACI) has recommended that moderately or severely immunocompromised Canadians may receive a second booster or fourth shot at least six months after their last dose.

However, a fourth shot has not yet been approved for the general population.

The only way to prevent another wave would be to reintroduce restrictions, experts say, but that is unlikely to happen.

“There’s no appetite for that,” said Evans.

“None of us want to go backwards … but … if we don’t get this under control, we will end up going backwards,” he said.

— with files from Jamie Mauracher, The Canadian Press