Amanda Connolly GlobalNews.ca
April 7, 2022  4:11 pm
WATCH: Despite $31 billion more in new spending, the 2022 budget has more modest spending plans than what analysts anticipated. The Liberals say they're being "fiscally responsible."

“This is a modest budget,” said Sahir Khan, executive vice-president at the University of Ottawa’s Institute for Fiscal Studies and Democracy.

“The uncertainty in the economic environment has shaped this.”

In broad strokes, Khan said the budget represents a shift from an era marked by large-scale, emergency government spending to a transition period where inflation is — hopefully — a short-term phenomenon amid the turbulence of the current global economic upheaval.

The extent of that uncertainty and volatility is the big question mark hanging over what Khan described as the budget’s relatively “modest” spending commitments.

Freeland acknowledged in the budget that after the almost unprecedented spending of the COVID-19 pandemic’s crisis phase, now is the time to lift the government’s foot off the economic gas pedal.

“Fighting COVID and the COVID recession came at a high price,” Freeland wrote in the budget.

“The money that rescued Canadians and the Canadian economy—deployed chiefly and rightly by the federal government to the tune of eight of every 10 dollars invested—has depleted our treasury. Our COVID response came at a significant cost, and our ability to spend is not infinite.”

Federal Budget 2022: Feds eye growth with $31B in new spending

Freeland emphasized the need to “review and reduce government spending.”

She also stressed that the government’s longstanding fiscal anchor — a declining debt-to-GDP ratio — must continue to shrink. That ratio is projected to decrease from 46.5 per cent of GDP last year to 41.5 per cent of GDP by 2026/2027.

“The extraordinary debts we incurred to keep Canadians safe and solvent must be paid down. This is our fiscal anchor—a line we shall not cross, and that will ensure that our finances remain sustainable so long as it remains unbreached.” 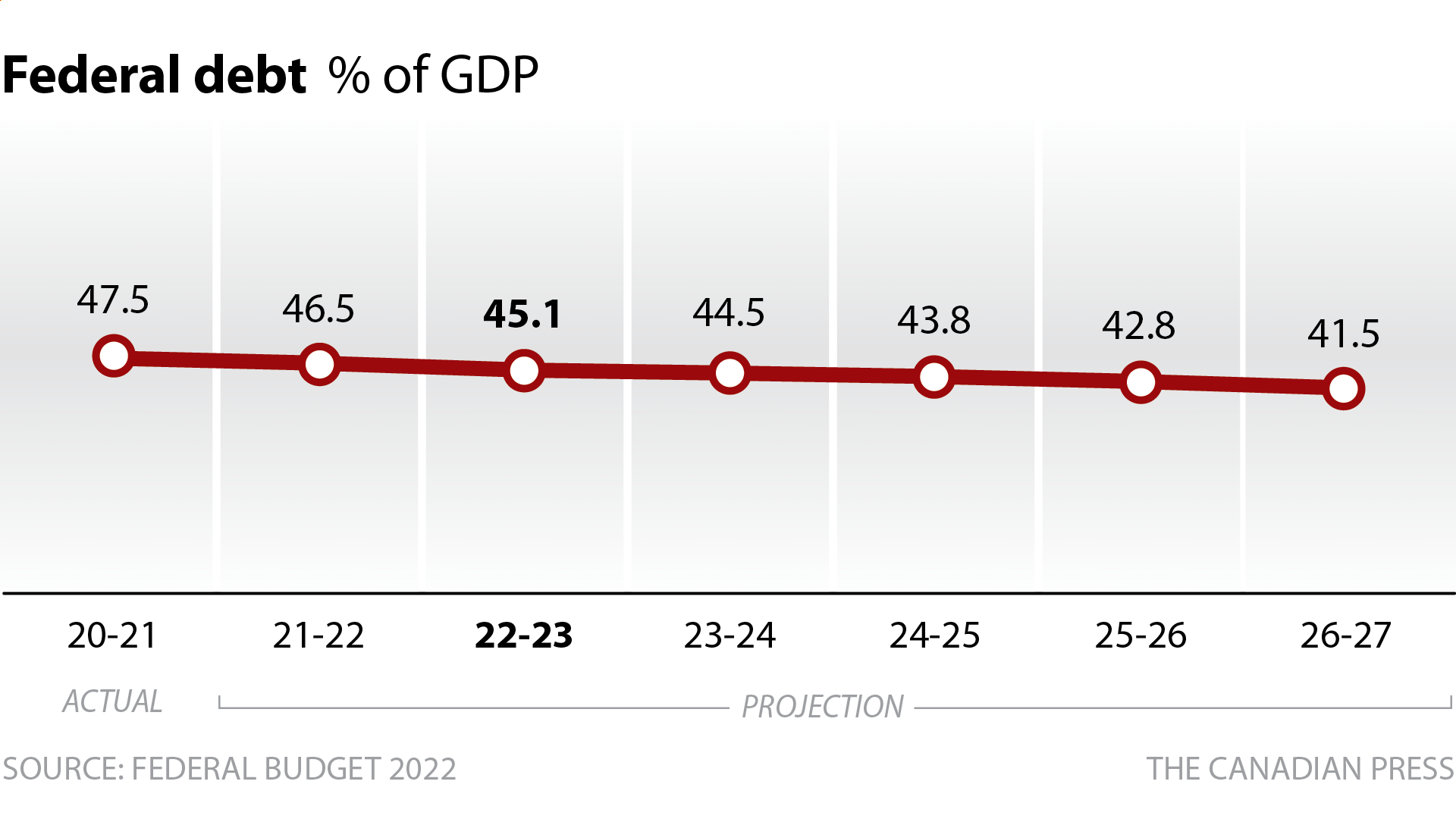 With that in mind, she said the budget’s spending promises are focused on “smart” investments.

Those include billions of dollars dedicated to attracting research and development dollars, building a national critical minerals strategy that goes part and parcel with the government’s commitment to ramping up the use and domestic production of electric vehicles.

Critical minerals like lithium and cobalt, among others, are vital components for the production of electric vehicles as well as the semiconductor chips essential to the functioning of the computers that power everything from cellphones to smart TVs to factory production lines.

The COVID-19 pandemic and resulting societal lockdowns have roiled global supply chains over the past two years. That’s fueled shortages of everything from homebuilding materials to toilet paper and flour, to semiconductors as consumer behaviour shifts.

Those struggles are coupled with the economic spillover of rampant inflation, now at multi-decade highs across much of the world, including Canada, as well as Russia’s invasion of Ukraine.

“I think the global backdrop of this budget is especially important,” said one senior government official.

“That’s a key point, if I can convey to you. Uncertainty is a big part of our thinking and the government’s formulation of this budget.” 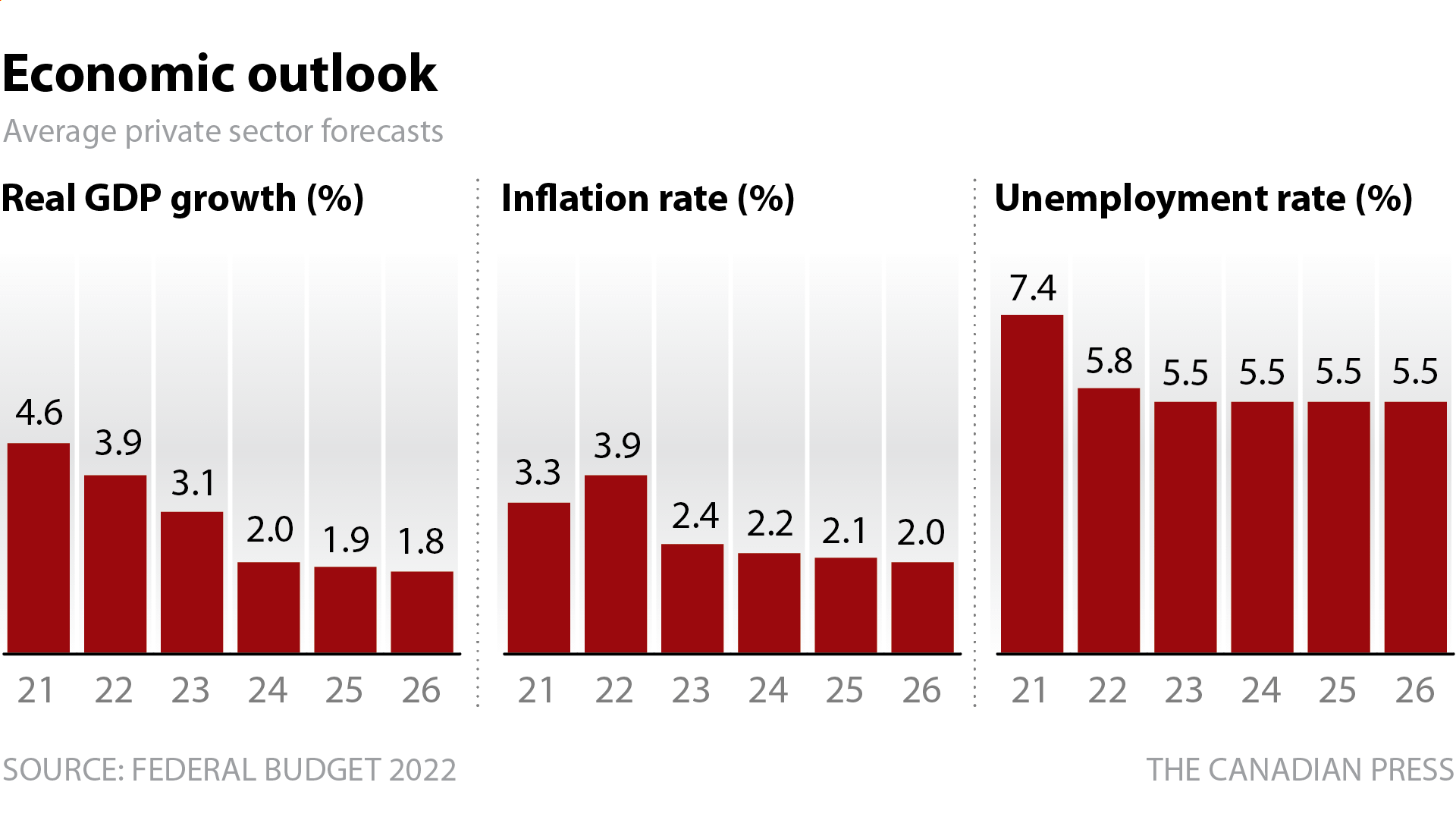 That uncertainty figures prominently in the challenge ahead for the government, Khan said, as the economic effects of Russia’s invasion of Ukraine drag on the global economy. Those will force Canada to confront core questions about how to square its climate change ambitions with natural resource development billed as central in transitioning reliance away from Russia.

Russia’s unprovoked invasion is cited in the budget as a factor behind the decision to boost defence spending by $8 billion over five years on top of already promised increases, and launching a defence policy review taking stock of the rapidly changing global security risks.

Boosts to cyber defence are part of that increase, as are promises to implement a foreign beneficial owners’ registry for companies, launching a review of Canada’s anti-money laundering and terrorist financing rules, and moving on promises regulation for crowdfunding.

The budget also promises measures aimed at tackling the rising cost of living for Canadians.

Those include a preliminary dental care program for kids under the age of 12, banning most foreign buyers from the real estate market for two years, and introducing a new savings account for Canadians using the money — tax-free on the way in, tax-free on the way out — to save for a down payment on their first home.

Several of those measures were key demands from the NDP, which sealed a confidence and supply agreement with the government last month promising to support the Liberals until 2025 if priorities like dental care and pharmacare are met.

Pharmacare was not in this budget, but is expected to be a bigger focus next year.

The budget marks the first test of that governance deal struck last month between the Liberals and NDP.

As a confidence matter, the Liberals must get support from at least one other party to pass their budget and remain in government. The NDP support until 2025 is expected to see them back four budgets.

Conservatives, however, expressed concerns about the spending proposals laid out on Thursday.

Budget 2022: 4 things that will affect your pocketbook

In a statement, interim Tory Leader Candice Bergen criticized the plan as one that “failed” Canadians struggling with rising inflation and unaffordable housing.

“This is not a responsible budget – this is an NDP budget. It is a budget funded by Canadians suffering from inflation. Canadians need a break and they didn’t get one from the NDP-Liberal budget today,” she said.

“The more Liberals spend, the more expensive everything gets … to control inflation, you have to control spending. They have failed. Trudeau continues a tax-and-spend agenda to satisfy the NDP.”

NDP Leader Jagmeet Singh said the party had wanted to see more increases in health spending and on the environment, including funding for clean energy projects and retraining workers.

But he said the spending on dental care and housing address key priorities for the party.

“The budget reflects the priorities that we laid out,” he said.

“It is sufficient for our support to continue.”