A couple of players on the Winnipeg Blue Bombers got healthy while the team was on its bye week.

The Bombers got back to work on Monday to prepare for Friday’s matchup against the 4-3 BC Lions with defensive tackle Steven Richardson and returner Janarion Grant both taking part in practice.

Richardson missed all but the season opener, sitting out the past six games with a partially torn plantar fascia in his foot. He is expecting to return to the lineup this week and considering he was hurt in the very first game after not playing at all in 2019, it was an especially tough pill to swallow.

“You come back and the first game, just out,” said Richardson. “It was definitely frustrating, but what I kept telling myself is it could have been worse, could have been a whole lot worse.

“It feels really good to be back out there. I think I’m most excited about just being able to see myself on film again. It’s just so boring in the film room. Your jersey number never shows up and so you’re just sitting there watching.”

Grant is also ready to go again, saying he is now 100 per cent. He also missed the past six games, sidelined with a right ankle injury.

He returned three punts for touchdowns in 2019 as a rookie and the Bombers’ return game could certainly use the boost with their return averages in kickoffs and punts ranked in the middle of the league.

“We just got to go out there and execute more,” Grant said. “Just being able to take advantage of the opportunities that we have. We have great guys as well as me out there to be able to return kicks, and catch the punt returns. So, that’s all that really is.”

Charles Nelson has handled the majority of those duties in Grant’s absence.

“Charles Nelson is a good returner,” head coach Mike O’Shea said. “Doesn’t matter which returner is back there. If we don’t give him a cleaner picture to look at, I don’t know what changing the returner would do.” 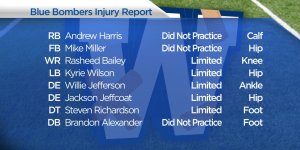 The bye couldn’t have come at a better time for the blue and gold, now at the halfway mark of the CFL season. And the head coach saw a rejuvenated group in the first practice back.

“I do think the guys needed a rest and hopefully they got what they needed,” said O’Shea. “It seemed like it. It seemed like the guys were active today, and good in the meetings and focused. And ready to be back, happy to see each other again, which is nice.”

The West Division-leading Bombers travel to B.C. to face the Lions on Friday with kickoff scheduled for 9:00.