Addressing the Ontario Securities Commission on Nov. 23, Bank of Canada deputy governor Paul Beaudry said a “sudden influx” of investors in the housing market likely helped fuel rapid price growth in early 2021. Canada’s home prices were up 24.4 per cent in June compared with the same month last year, according to data from the Canadian Real Estate Association (CREA).

“Our analysis finds that many Canadians are buying homes as investment properties — that is, in addition to their principal residence — and the importance of this phenomenon has grown,” Beaudry said in prepared remarks. 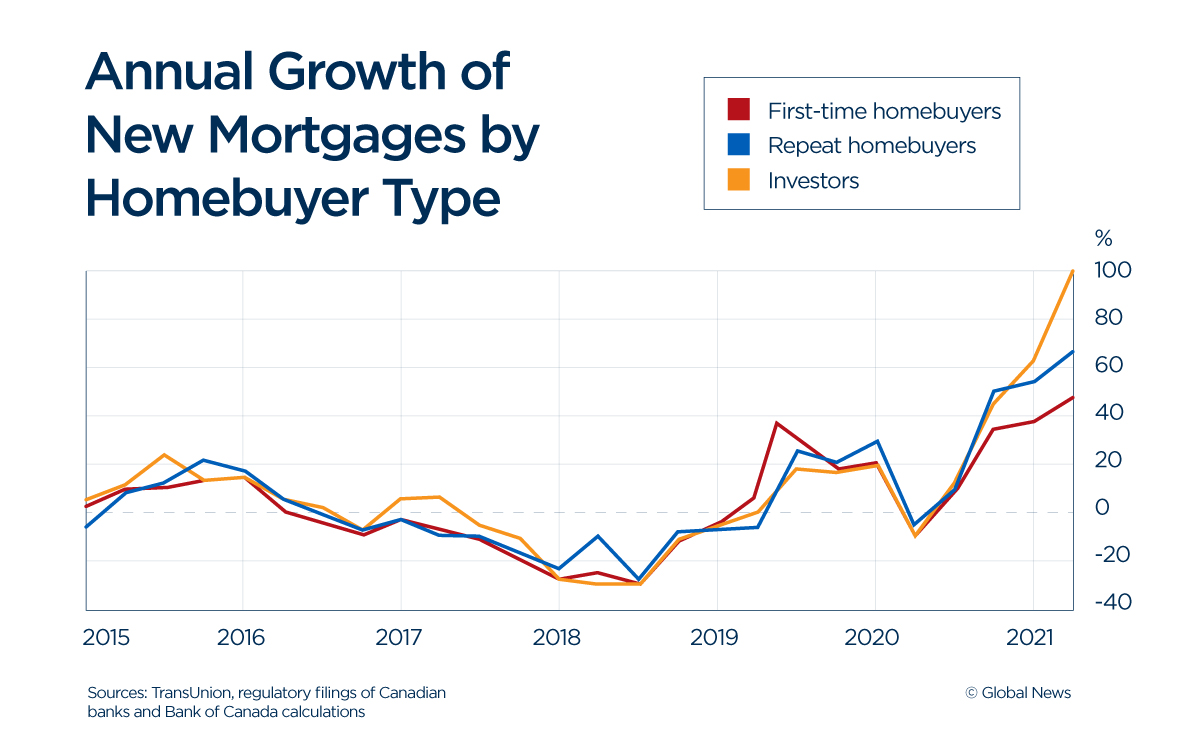 Buoyed by skyrocketing price appreciation, many Lower Mainland homeowners have been tapping the home equity on their principal homes to buy investment properties or vacation homes in coveted spots like the Okanagan, she says.

Many investors perceive housing as a less risky place to put their money compared with financial markets, King says. And the record price gains recorded since the summer of 2020 mean “real estate continues to be something that attracts people,” she adds.

In Vancouver, benchmark home prices recorded a one per cent increase in November compared with October. In Toronto, average home prices climbed 2.5 per cent higher in November, reaching $1,163,323, an almost 22 per cent jump from $955,889 in November 2020.

In Ontario, homeowners who already have one or more homes made up fully 25 per cent of property title changes between January and August of 2021, according to a recent analysis by Teranet. That’s up from around 16 per cent in 2011.

“While end-users were the primary driver of the Toronto area’s housing boom in 2020, that trend appears to be changing in 2021,” John Pasalis, president of Toronto-based Realosophy Realty, wrote in a recent report. Now investors seem to be playing a larger and larger role in driving up the city’s real estate prices, he added.

And while home price growth cooled off somewhat in the summer, the market is heating up again. Nationally, home prices jumped 2.7 per cent in October compared with September and were more than 23 per cent higher compared with October of 2020, CREA data shows.

Mortgage data shows increased activity from what are likely two groups of multi-property owners, says Rebecca Oakes of Equifax Canada. On the one hand, there are borrowers with two or three active mortgages on their credit file. This group likely includes a significant number of homeowners who have a principal property and one or more vacation homes, Oakes says.

Then there are those with four or more mortgages, who are more likely to be real estate investors. The number of homeowners in this group was up more than 15 per cent in the April-to-June period of 2021 compared with the same period in 2019, data from Equifax Canada shows. The increase was particularly pronounced in Ontario (up more than 21 per cent) and Quebec (up nearly 16 per cent).

Still, nationally, this group now makes up just 1.3 per cent of consumers with a mortgage, according to Oakes.

“It’s still quite low. But there definitely is growth last year and this year,” Oakes says.

Homeowners with more than one mortgage account for more than 16 per cent of the market, according to the data.

One of the concerns with an outsized presence of real estate investors in the market is that they can cause home prices to rise much faster than they otherwise would, locking out others who are hoping to buy a home to live in, Pasalis warned.

When purchasing property, investors are less constrained by income considerations than traditional homebuyers because they count on turning a profit by eventually selling the home for a higher price, Pasalis noted. That also explains why investors may not be deterred even when the carrying costs of a home far surpass the rental income the property can generate, he added.

In his report, Pasalis provided the example of comparable condo units at a downtown Toronto building whose price skyrocketed from $648,000 at the end of 2018 to $890,000 in October of this year. At that price, an investor with a down payment of 20 per cent and a 30-year mortgage would face a monthly mortgage payment of $3,500, roughly $1,000 more than the market rate for that type of unit, Pasalis wrote.

But “as long as there is another optimistic investor around the corner willing to pay even more, prices will keep rising,” he predicted.

That kind of investor psychology is similar to what Pasalis says he noticed in Toronto during the 2016-2017 run-up in home prices that prompted the federal government to step in with mortgage stress test requirements for borrowers.

Investors’ expectations of future price gains can also “expose the market to a higher chance of a correction,” the Bank of Canada’s Beaudry warned. “And, if one occurs, the damage can spread far beyond the investors. That’s because, for many households, their wealth and access to low-cost credit are tied to the value of their home.”

Research into the U.S. housing market crash of 2007-08 found that investors, who had taken on more debt and were more sensitive to home price declines, had higher rates of mortgage default compared with owner-residents, something that amplified the downward swing in home values once the housing bubble burst.

“In states that experienced the largest housing booms and busts, at the peak of the market almost half of purchase mortgage originations were associated with investors,” according to a research paper by the U.S. Federal Reserve Bank of New York.

Beaudry, however, downplayed concerns about a housing crisis in Canada.

“None of that is to say a calamity is on the horizon,” he said in the prepared remarks, adding that the country’s financial system remains “generally quite resilient.”

Still, he added: “A drop in housing prices could significantly affect household spending, with repercussions for employment — even if it didn’t put the financial system at risk.”