WATCH: What are fibroids?

You can think of a fibroid as a hard ball of muscle.

Dr. Yolanda Kirkham, obstetrician gynecologist at Women’s College Hospital and St Joseph’s Health Centre in Toronto, told Global News that fibroids are common, and more than 50 per cent of women have them.

“It’s very unusual for someone under 30, for example, to have many or large fibroids,” she explained. “By menopause, or age 50 to 70, sometimes up to 80 per cent of people may have fibroids by that time.”

Fibroids — also called leiomyomas or myomas — are types of growth that can be found in or on a woman’s uterus. They can also grow over time.

READ MORE:
Everything men and women should know about fertility testing

A fibroid is different than cysts or polyps, Kirkham added, but there’s often confusion among the three. A cyst is a soft balloon of either fluid or blood.

“ don’t grow in or on the uterus,” Kirkham explained. “Cysts usually grow on an ovary or sometimes on our skin.”

A polyp, meanwhile, is a soft, fleshy tissue that grows on the inside of the uterus.

But fibroids aren’t necessarily dangerous — more than 99 per cent are benign. Sometimes, women can have them with no symptoms; other times, they may have to be removed.

“It may not be clinically significant, meaning that it may not impact their life,” she said.

There is no one cause of fibroids, but Kirkham added they have been linked to genetics, race (Black women are more likely to have fibroids), hormones, environmental factors and other causes.

“There is nothing you can do to prevent that.”

Where do they grow?

There are three main types of uterine fibroids.

Subserosal fibroids are found on the outside of your uterus. Fibroids found within the wall of the uterus are called intramural fibroids.

READ MORE:
What women need to know about getting their tubes tied

And those balls of muscle that grow in the cavity of the uterus are called submucosal fibroids. 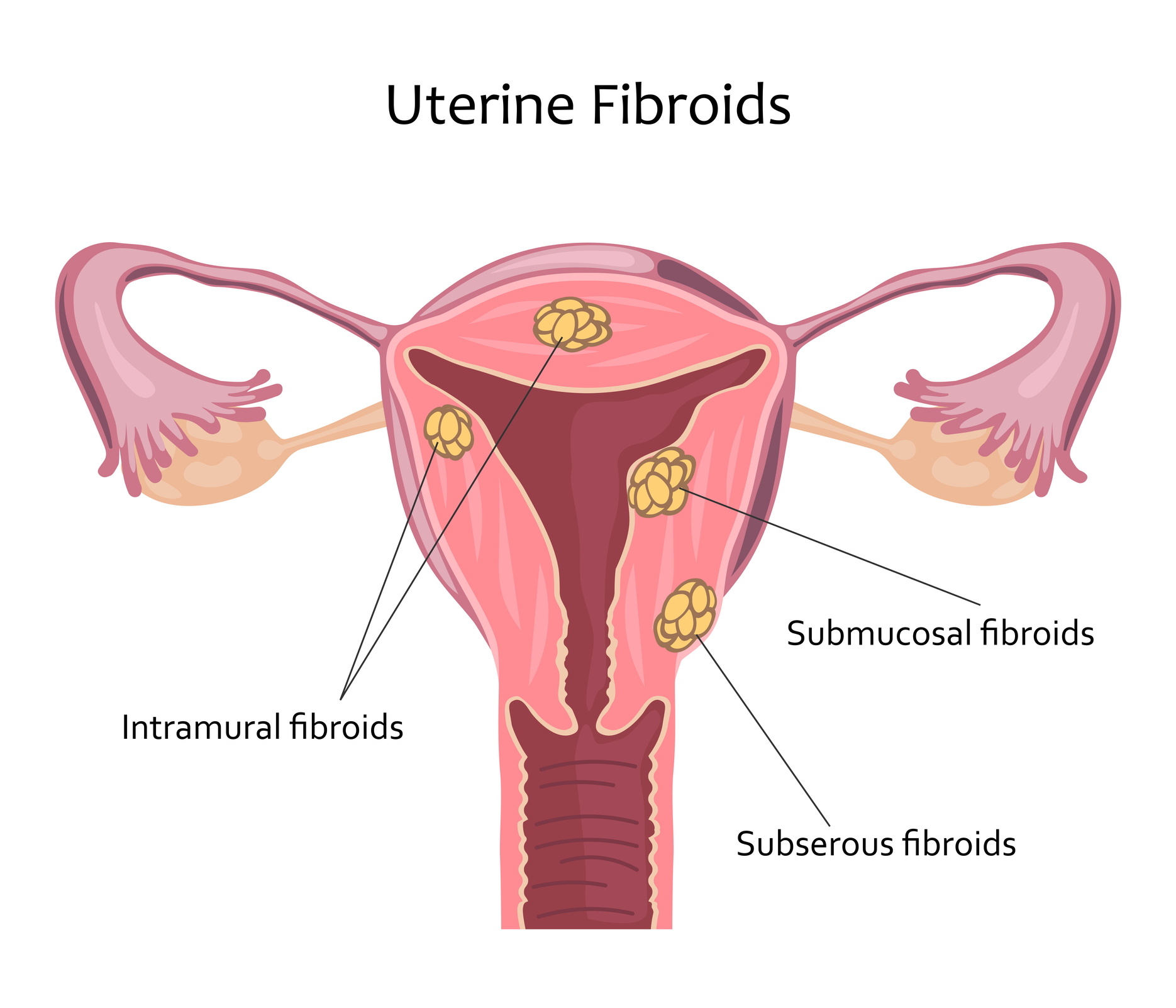 “Symptoms depend on where the fibroids are located,” she continued. “For example, if you have a little one-centimeter or two-centimeter muscle ball in the wall, that doesn’t really cause any problems at all.”

Subserosal fibroids can get quite big (up to 10 to 15 cm) which can cause pressure on your bladder.

“Same with the intramural and submucosal,” Kirkham explained. “Anything in the wall that big would cause pressure.”

Your period can also be affected

One of the biggest symptoms of fibroids is a heavy period for women in their 40s and women who are pre-menopausal.

“Fibroids on the outside of the uterus would not affect a period, but the ones in the lining can cause period problems.”

These fibroids “impeded contractions,” meaning it becomes difficult for your period to stop flowing. Submucosal fibroids can also change your bleeding patterns.

READ MORE:
A heavy period isn’t always normal — it could be a sign of a bleeding disorder

A heavy period, she added, is using more than three to five pads or tampons a day, leaking through your clothing or changing your pad or tampon overnight multiple times.

“They may be overflowing or their flow may be going on for a week and even months,” Kirkham said.

Fibroids only become an issue if they are symptomatic (and this is often the case for women over the age 40), but for others, treatment is not required.

Kirkham said treatment is often managing heavy bleeding or any type of cramping. This can be done with off-the-counter medicine. There is also now medication that can reduce the size of a fibroid.

“Because some people are bleeding for months on end and they’re becoming quite anemic (low blood and iron)… this can help improve their anemia.”

Speak with your doctor to figure out which medication is right for you.

READ MORE:
A heavy period isn’t always normal — it could be a sign of a bleeding disorder

Kirkham said doctors often start with oral medication or an injection, but for others, surgery may be required.

“This can be done either by laparoscopy which is minimally invasive with a telescope through the belly button,” she explained. “Or can be done by an open incision on the abdomen to shell out all of the fibroids from the uterus.”

She added some people may never need surgery, but it all comes down to the size of fibroid.

Submucosal fibroids can even sometimes come out of the uterus and make its way into the vagina. This surgery is often more urgent.

There are also treatments where the fibroids are shrunk with a laser or frozen.

“We also have a hysterectomy which removes the entire uterus with the fibroids together.”

She added they also shrink on their own during menopause.

If you are ever concerned or experience any of these symptoms, talk to your doctor right away, she added. The most important thing women can do is be clear of what fibroids are and where they live.