Saba Aziz GlobalNews.ca
March 23, 2022  10:22 pm
Public health restrictions are lifting, but there is, of course, the possibility they could return. So what does that uncertainty mean for our mental health? Jamie Mauracher looks at pandemic flux syndrome.

Surveillance of wastewater data is suggesting that COVID-19 cases are on the rise again in Canada as provinces have eased public health restrictions.

The resurgence is taking place in Ontario, Alberta, Saskatchewan and parts of British Columbia, according to an analysis by Global News.

“The reality is that as all of the restrictions come off in terms of masking and the other measures which have been in place for some period of time, we can expect that more cases are going to be out there,” said Dr. Steve Hrudey, chair of the research advisory group of the Canadian Water Network COVID 19 Wastewater Coalition.

“The next few days to weeks are going to be important to watch,” he said.

The wastewater signals are correlating with the reported infections through testing, but they paint a more accurate and full picture of how prevalent COVID-19 actually is in the community, experts say.

People infected with COVID-19 can shed the coronavirus through their stool, even if they do not have any symptoms, making the testing of a community’s sewage an important tool that can work in tandem with clinical testing data, according to the Public Health Agency of Canada (PHAC).

“Wastewater testing provides a true picture of COVID-19 community health, especially in the current situation when resources for clinical testing may be limited in some areas,” said Anna Maddison, a PHAC spokesperson, in an emailed statement to Global News.

So what is Canada’s sewage water telling us about the latest COVID-19 spread?

In the province of Ontario, following a dip in February, COVID-19 cases started spiking in early March, coinciding with the province’s phased reopening.

This is according to the Ontario COVID-19 Science Advisory Table, which is monitoring data from across 101 wastewater treatment plants, pumping stations and sewer sheds in 34 public health units. 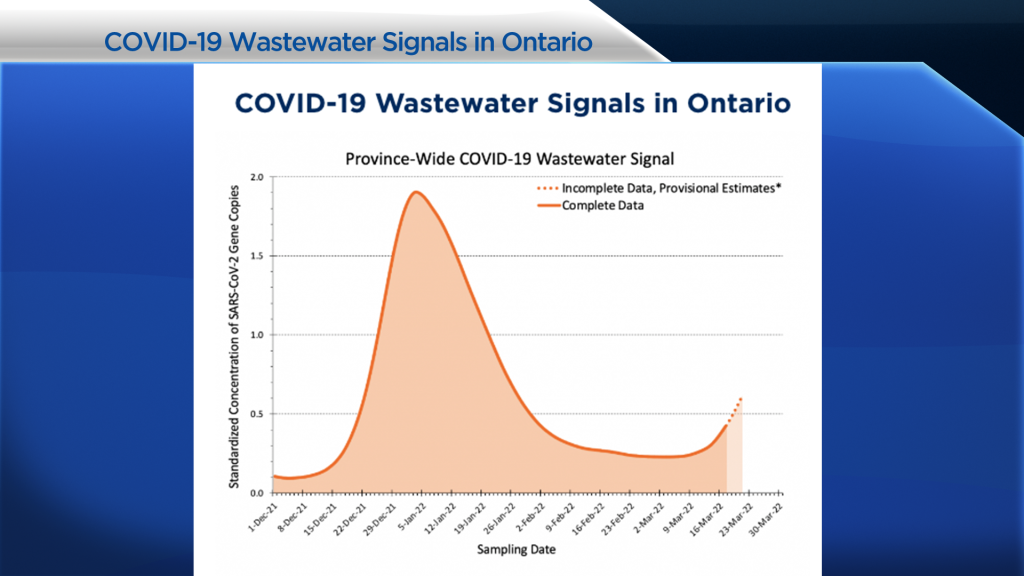 Dr. Peter Juni, a professor of medicine and epidemiology at the University of Toronto and scientific director of Ontario’s COVID-19 Science Advisory Table, said since Tuesday they have seen a “relatively steep increase” in coronavirus prevalence in the wastewater consistently in all regions in the province.

He said together with test positivity, the wastewater data is an early indicator that “as expected, we’re seeing a resurgence now.”

“There is a lag between what we are seeing in wastewater and in case counts,” Juni said.

“It remains to be seen how much of what we’re seeing in wastewater will eventually translate also into hospital occupancy,” he added.

Juni said since only 10 per cent of all infections are reported through testing, the actual case count in the province is likely 10 times higher.

“These 2,000 cases are more like 20,000 cases. In fact, when we use wastewater directly to triangulate case counts, we estimate that we’re at between 20 and 25,000 cases of infections daily,” he said.

It’s a similar story in Alberta, where an upward trend started in early March, according to wastewater samples collected, processed and reported by teams at the University of Alberta and the University of Calgary.

This data covers more than 80 per cent of Alberta’s population.

Hrudey, professor emeritus at the University of Alberta, said recent data does suggest that cases are climbing back up in the province, but not dramatically so as of yet.

Researchers at the University of Saskatchewan are keeping a close eye on the wastewater trends of COVID-19 in Saskatoon, Prince Albert and North Battleford.

As of March 16, the viral load in Saskatoon’s wastewater increased by 66.3 per cent compared to the weekly average of the previous week. 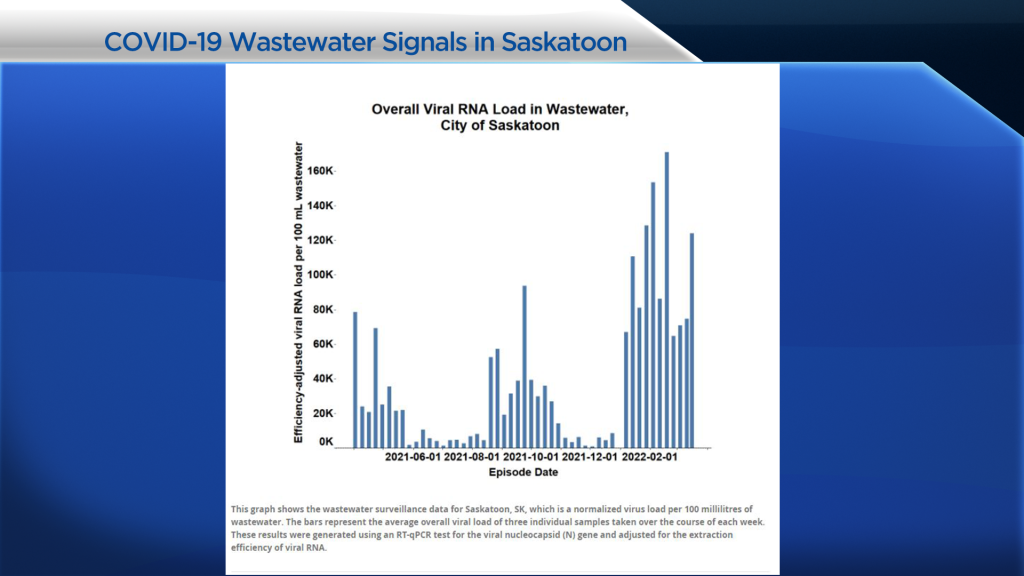 “This increase in viral RNA load is indicative of an increase in SARS-CoV-2 infections in Saskatoon, which — in a partially vaccinated population — may or may not be reflected by new case numbers in upcoming weeks,” the USak researchers noted.

“The trend over the last three weeks has been increasing which indicates a double wave for the Omicron wave driven by the BA.2 subvariant,” they said.

In Prince Alberta, the viral load in wastewater was up by 96.1 per cent and in North Battleford by 93.2 per cent, data showed.

However, in British Columbia, the increase is less prominent for now.

This is according to the surveillance at five wastewater treatment plants, presenting 50 per cent of the province’s population.

Of the five regions being monitored by the B.C. Centre for Disease Control (BCCDC) and Metro Vancouver, COVID-19 prevalence was only seen rising in Fraser and North Shore. 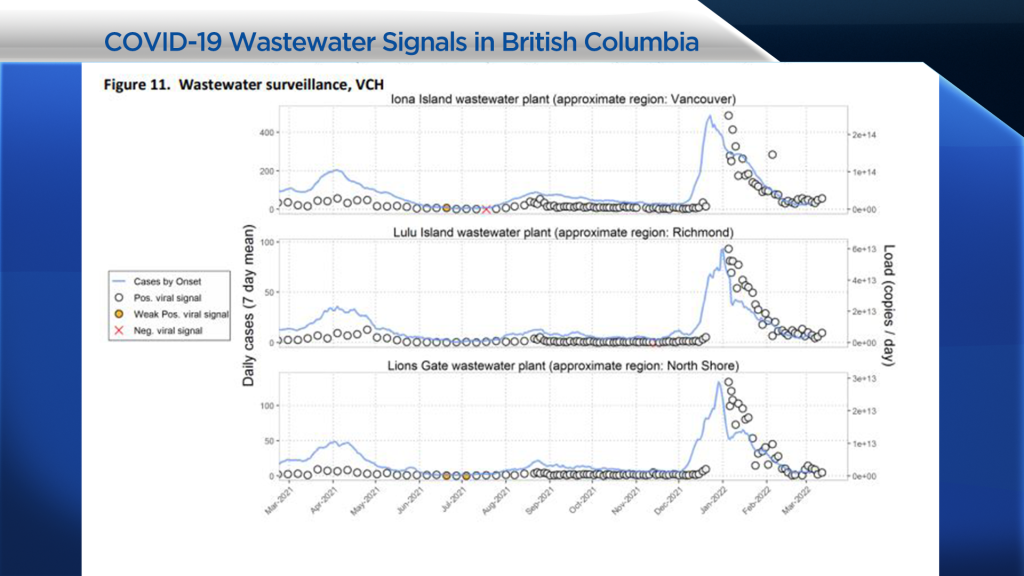 Experts say wastewater surveillance has proven to be an effective tool for tracking COVID-19 trends and predicting future outbreaks.

“When you’re using wastewater surveillance, it’s a tool that helps you recognize very early how much community activity there is before people start becoming sick,” said Dr. Donald Vinh, an infectious disease specialist and medical microbiologist at the McGill University Health Centre (MUHC).

It is also a harbinger of increased hospitalizations and deaths, he said.

Going forward, wastewater monitoring is going to be very important, both in the short term for COVID-19 and in the longer term for other types of germs, Vinh said.

However, this type of surveillance also has its limitations as it does not indicate which individuals, households or age groups are infected, he said.